Stories on the Move 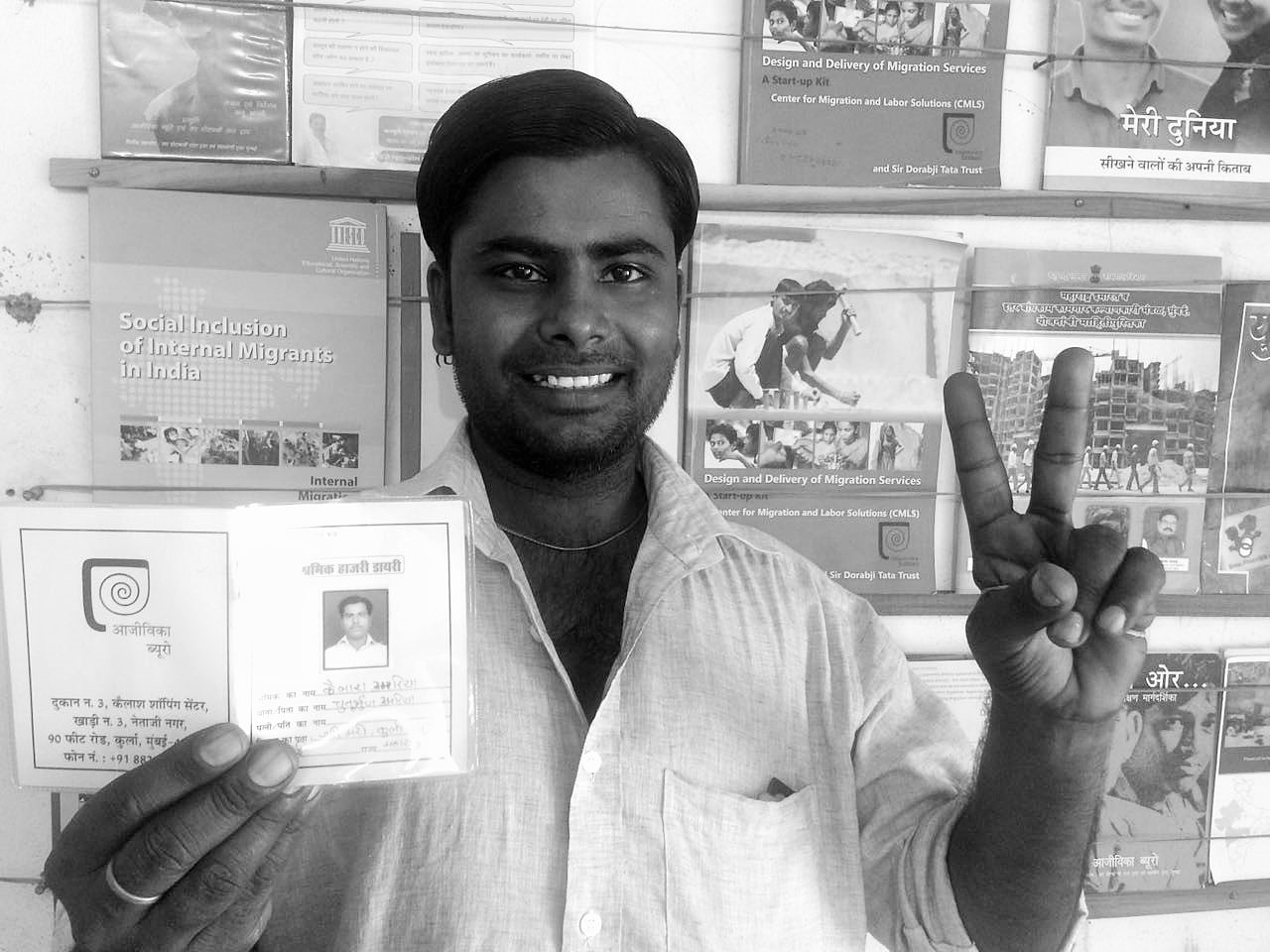 Armed with a few sets of clothes and innumerable aspirations, Kailash Umariya left his village in Ajmer, Rajasthan, as a teenager.

“From toothbrushes, shoes and toys, to pendrives, sweaters and clothes- I sold everything,” says Umariya, who spent the first few years on Delhi’s streets. It was the desire to “make it big” in Mumbai, the “Sapnon ki Nagari” or land of dreams, which drew him to the city twelve years ago.

“I began my career as a helper on construction sites in Mumbai. While I ended up doing odd jobs at the beginning, I gradually picked up plumbing skills,” says the 35-year-old. Kailash now lives with his family in Mumbai and is gratified to report that he has work every day of the week.

Kailash Umariya is a founding member of Aajeevika Bureau’s Kamgaar Sahayta Samiti in Mumbai, a worker’s collective co-established with Aajeevika Bureau and employers, workers and other local stakeholders in Kurla. The committee negotiates and reflects upon issues related to labour, rights and demands, and takes collective decisions for workers’ well-being.

This story was featured in our newsletter, Migrantscape, which can be found here.

Sunita, from Chhasiya, Dahod, has been working in the industrial area of Narol, Ahmedabad since she got married. Soon after her wedding, she and her husband started working at a boiler of a well-known textile company in Narol.  Each and every factory in Narol has a boiler and they are critical to the functioning of the machines in the factories.

Sunita Ben works around 12 hours non-stop, day and night. The Contractor doesn’t allow anyone to speak to boiler workers, as per the instructions given by the company owner. Nothing can distract from the task of continually loading the furnace with more fuel. Sunita Ben’s life is completely restricted to the factory’s premises 24 X 7.  She lives in a make-shift home right outside the boiler.  “We are grateful to god for gifting us nights, otherwise how else could we have taken the much-needed rest” says Sunita ben.

This story was featured in our blog, which can be found here. 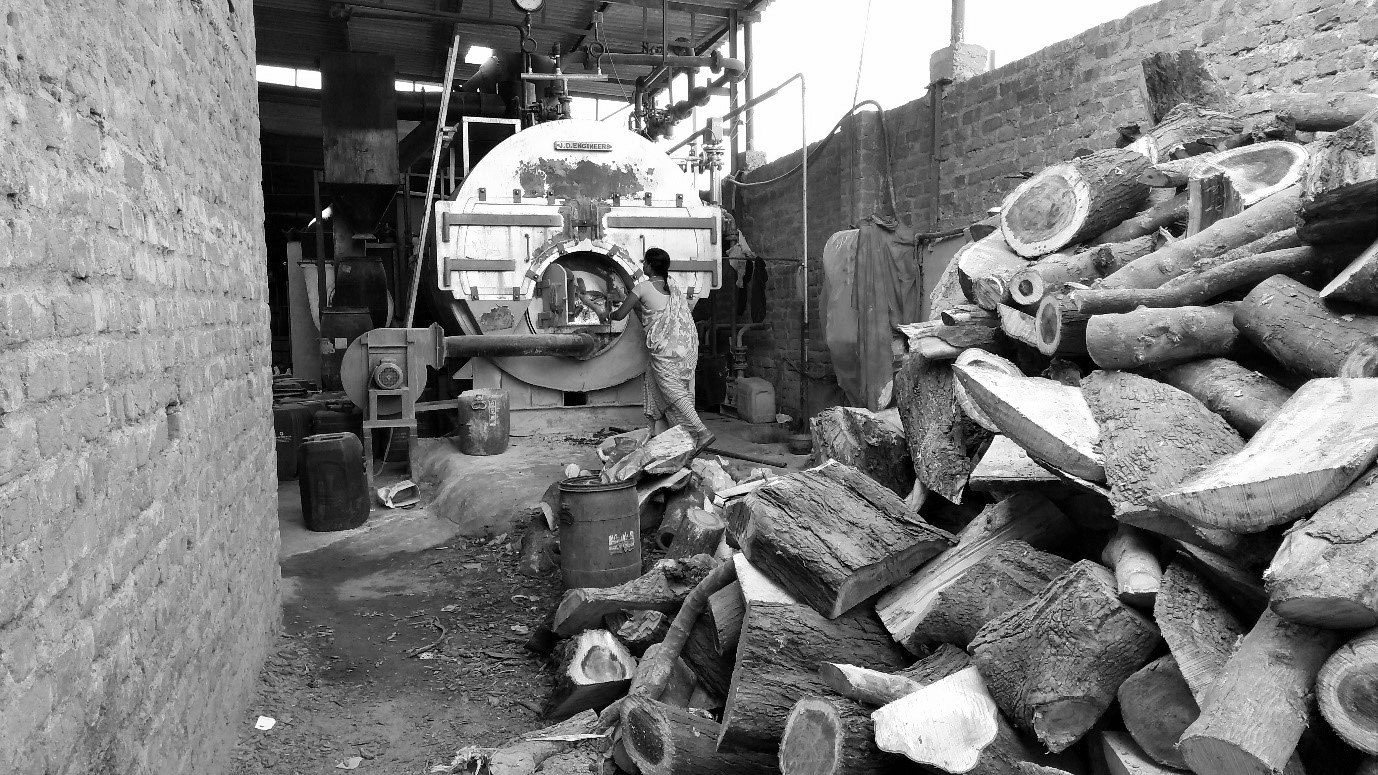 Fires then and now 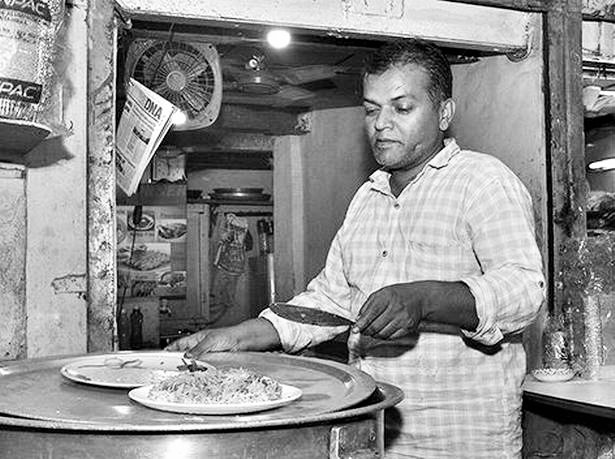 In the early hours of Monday, 42-year-old Salim Hashmi awoke to the sound of fire engines and ambulances zooming past his biryani shop on Khairani Road, Saki Naka. Barely 500 m away, a fire had erupted from a short circuit at Bhanu Farsan Shop, charring 12 young migrant workers to death.

He remembers trying to wedge his way into the unit, with little success. It was like an old memory unspooling for him; he had witnessed something similar over three decades ago. “In 1985, when I was still in school, a boiler burst in a factory on Khairani Road, killing nearly 50 workers. Since then, we have heard of small fires and accidents in the units, but nothing as big as now.”

“Indira Gandhi,” the neighbours would call her, because of her imperious manner, high-decibel voice, and a temper that scared the little children. But now, scrabbling in the debris to find her plates and spoons, Khairunissa Ansari, 61, is bereft of dignity, let alone hauteur. Her home is gone — what were its walls is now rubble beneath her feet — and she is just an ageing woman with no place to go.

Ms. Ansari’s house had been razed by the Brihanmumbai Municipal Corporation (BMC) on October 26. “My house did not even fall within the 10-metre area earmarked by the BMC,” Ms. Ansari says, sitting on a bed created from the remains of a broken door. “The authorities came here unannounced and gave us no time to even gather our belongings. I am left with nothing.” She is a migrant from Allahabad, and her husband worked as a tailor in a garment workshop until his death 15 years ago. “We had very little savings after his death. I have all my identity documents, I have been paying my bills. And my house was not even listed by the BMC. How am I going to rebuild my house the second time around?” Ms. Ansari, like many other residents, had lost her possessions in another devastating fire in March 2011, which injured 11 and reduced nearly 700 shanties to cinders, rendering more than 2,000 families homeless. 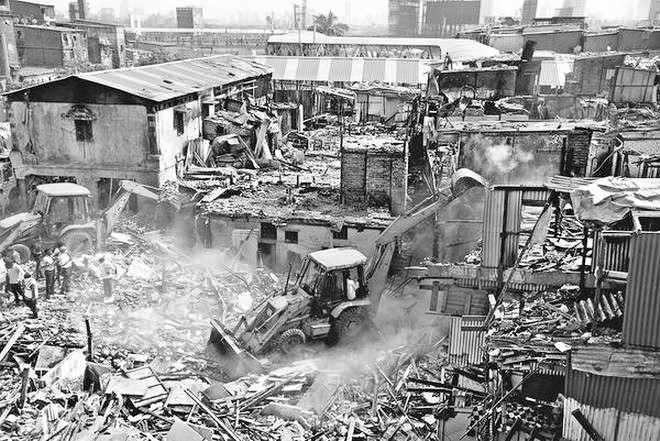 A story of dashed hope 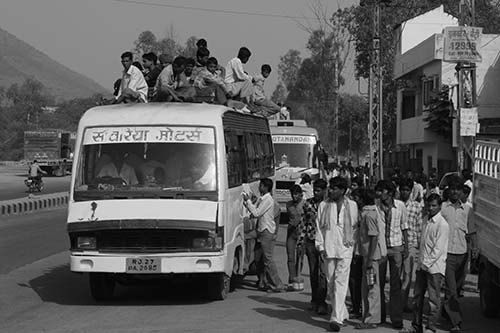 Tulsiram, 30, is a young migrant from Manchda village in Rajasamand district. In order to improve the financial health of his family he dropped out of the tenth grade and migrated to Mumbai at a tender age of 15 to work in a shop with his brother. His brother had been working in Mumbai for many years but wanted to return to the village owing to his ill health. Tulsiram too was dissatisfied with his experience working in Mumbai. He was paid a paltry amount and worked dreadfully long working hours. After enduring the marginal living conditions in Mumbai he quit working at the shop and moved to Deev (Daman and Diu) in the hope that life would be better. However, Tulsiram found himself in similar conditions in Deev where he worked in a factory that manufactured cardboard boxes. He now earns a meager daily wage of 110 rupees (1.8 USD) in predominantly unskilled work with a negligible annual increment of 5 rupees (less than 10 cents). Tulsiram has reluctantly spent the last 5 years working at the factory. He finds himself in a predicament that most young workers from the region face. Seeing no future in his present occupation, he wishes to return home, knowing that he may not even find work if he does.

Instead of money he got disease

Kamani lal, a father of three, is a resident of Kakarwa village in Rajasamand district. His wife, daughters and he live in a crammed one room home in the village. He dropped out of school after completing the fifth grade and migrated to Ahmedabad, Gujarat at the age of 17. There, he was trained to dye cloth for which he was offered an initial compensation of 3000 rupees (50 USD) per month. The work conditions however were poor and the highly toxic chemicals used for dying the cloth began to take a toll on his health. He returned to his village and six months later landed a job as a diamond cutter in Surat. He spent 8 years working as a diamond cutter and his salary rose from an initial amount of 4000 rupees (66 USD) per month to only 6500 rupees (108 USD) per month - an average increment of around 300 rupees (5 USD) a year. Inspite of the low wage increment, Kamani lal was making enough to meet expenses and was satisfied with the work. He was working 12 hours a day, seven days a week, which put immense strain on his vision. The need for precision in diamond cutting made it challenging for him to work and further deteriorated his eyesight. Eventually he was compelled to return to his village.

Kamani lal, now 30 years old, continues to survive marginally in his village with mounting domestic responsibilities and a deteriorating vision. With no intention of migrating again and only 3 bighas of land to cultivate, his livelihood continues to be plagued by uncertainty. 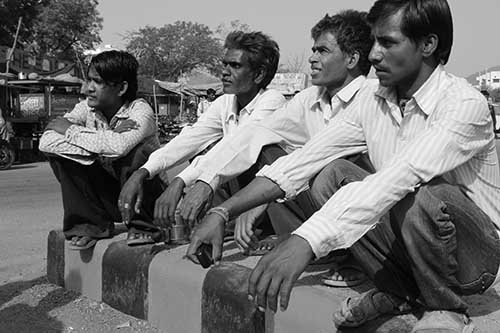 Helpless in an alien land 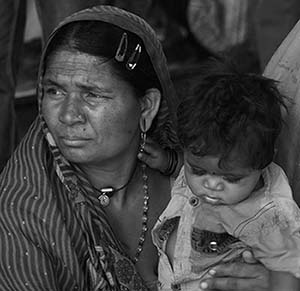 Mangilal belongs to the Mogiya community of Southern Rajasthan - a community of skilled sculptors who create statues of deities from plaster of Paris. During peak seasons, the Mogiyas are known to migrate with their entire families to different cities across India in order to sell their statues. Mangilal and his family often migrate to Delhi, Maharashtra and Gujarat and sleep on the street at night. Due to lack of proper shelter, he and his family is often robbed of their belongings and are forced to buy fuel from the black market at exorbitant prices. Moreover, they have to cope with ad hoc security checks by the police, extortion from municipal officials and are frequently coerced into moving from one part of the city to another. Mangilal himself has been harassed by the police twice on unfounded charges of theft, all because he was unable to furnish a valid proof of identity. His family and he live with the constant insecurity of being homeless and anonymous in an unknown city to earn the very livelihood that they depend upon.

A cheque to nowhere

Galba Charpota, an adivasi migrant worker from Banswara district in Southern Rajasthan, looked shoddy and drained when he entered Aajeevika Bureau’s office in Ahmedabad. He and his wife, teenage son and daughter had migrated to Ahmedabad a long time ago, in search of work because of agrarian distress back in their village. He presented us with a shabby, worn-out Cheque which his employer had given him to settle his family’s two month’s hard-earned wages. Galba seemed extremely uncomfortable making sense of the vocabulary and intricacies of the cheque. The cheque was unduly filled by his employer with incorrect information and had expired three months ago. Galba had been slyly tricked by his employer through the instrument of a cheque.

This story was featured in our blog which can be found here. 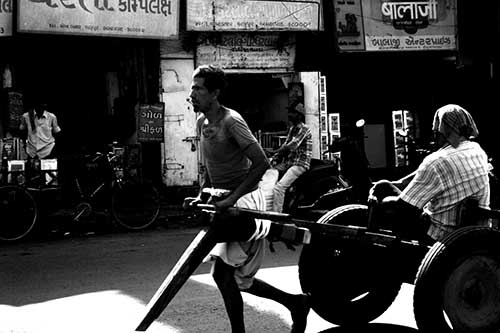 Vajaram, 23, hails from Pipala village in Kumbhalgarh. He often migrates to Udaipur, Kelva and Rajasamand in search of work. Two years ago he started working as an unskilled worker on a stone quarry along with five other friends from his village and was promised a daily wage of 100 rupees (1.6 USD) by the contractor. For the first year, they received their dues on time, however soon enough, the contractor began delaying wage payments. While Vajaram and his friends patiently waited for two months to receive their dues, the contractor insisted that they would be paid provided he was able to sell some more stones. They persisted in their attempt to recover their wages, however, the contractor refused to speak to them over the phone and was eventually untraceable.

Vajaram soon learnt that he wasn't alone. A group of 20 other workers who worked with him on the same stone quarry also found themselves in a similar quandary. The contractor owed each of them 6000 rupees (100 USD) for two months of work on the quarry - a collective sum of over 1.2 lakh rupees (2000 USD) in unpaid wages. None of the workers are aware of the contractor's whereabouts, nor are they aware of possible means to seek legal counsel and claim their hard-earned money.

Certificate Course on Labour Migration In India: Perspectives For Practice

Internal labour migration has emerged as a new-age development challenge for India. High economic disparity between regions, agrarian distress compounded by adverse climatic changes has pushed more and more rural poor to Indian cities. As per Economic Survey 2016-17 there are 139 million labour migrants in India who move between the rural and urban, struggling with disenfranchisement within the boundaries of their own country and an uncertain livelihood option which is their only exit from poverty.